Why Live in Calgary?

Set in the foothills of the Rocky Mountains at the intersection of the Bow and Elbow rivers, Calgary, Alberta exudes innovation, energy and a uniquely Western Canadian hospitality. As the largest metropolitan area between Vancouver and Toronto, Calgary is home to over 1.1 million people. It’s a global energy leader and a welcoming frontier for business and investment, which has helped the robust. Calgary real estate market expand rapidly.

Long renowned as Canada’s energy capital, Calgary is now a global leader in energy and enterprise. The concentration of the region’s energy sector, as well as the most competitive provincial corporate and personal income tax rates in Canada, have helped fuel unrivalled economic growth — Calgary has had the highest GDP (gross domestic product) growth of any Canadian city over the past 10 years at 29.6% (2001-2010).

But Calgary isn’t just home to virtually every major oil and gas company in the country or to the highest concentration of head offices per capita in Canada (at 9.3%) — it’s home to a dynamic population of 1.1 million residents who understand exactly why the city was ranked in the Top 5 of the Economist Intelligence Unit’s “2018 Most Livable Cities in the World” out of 140 global cities.

Calgary also has some of the sunniest weather in Canada. Although it can get chilly in the winter, the area is frequently swept by dry Chinook winds from the Pacific Northwest that can raise temperatures by up to 15°C in a single afternoon.

The city is also home to the Bow River, which flows through the prairies, the downtown core and out to the foothills where plenty of wildlife reside. Calgary also draws thousands of students to its post- secondary schools and is often the first stop tourists take on their way to Banff National Park.

Whether your dream home is a luxury condo overlooking the Bow River downtown, a home with a yard suitable for your growing family, or a rural estate you can retreat to in the foothills, Dylan &amp; Shannon can help.

The commercial core is itself divided into a number of districts including the Stephen Avenue Retail Core, the Entertainment District, the Arts District and the Government District.

Distinct from downtown and south of 9th Avenue is Calgary's densest neighbourhood, the Beltline. The area includes a number of communities such as Connaught, Victoria Crossing and a portion of the Rivers District. The Beltline is the focus of major planning and rejuvenation initiatives on the part of the municipal government to increase the density and liveliness of Calgary's centre.

Adjacent to, or directly radiating from the downtown are the first of the inner-city communities. These include Crescent Heights, Hounsfield Heights/Briar Hill, Hillhurst /Sunnyside (including Kensington BRZ), Bridgeland, Renfrew, Mount Royal, Mission, Ramsay and Inglewood and Albert Park/Radisson Heights directly to the east.

The inner city is, in turn, surrounded by relatively dense and established neighbourhoods such as Rosedale and Mount Pleasant to the north; Bowness, Parkdale and Glendale to the west; Park Hill, South Calgary (including Marda Loop), Bankview, Altadore and Killarney to the south; and Forest Lawn/International Avenue to the east.

Lying beyond these, and usually separated from one another by highways, are the suburban communities, often characterized as "Commuter Communities".The greatest amount of suburban expansion is happening in the city's deep south with major growth
on the northwestern edge as well. In all, there are over 180 distinct neighbourhoods within the city limits.

Several of Calgary's neighborhoods were initially separate towns that were annexed by the city as it grew. These include Bowness, Montgomery, Forest Lawn, Midnapore, Rosedale and, most recently in 2007, Shepard. 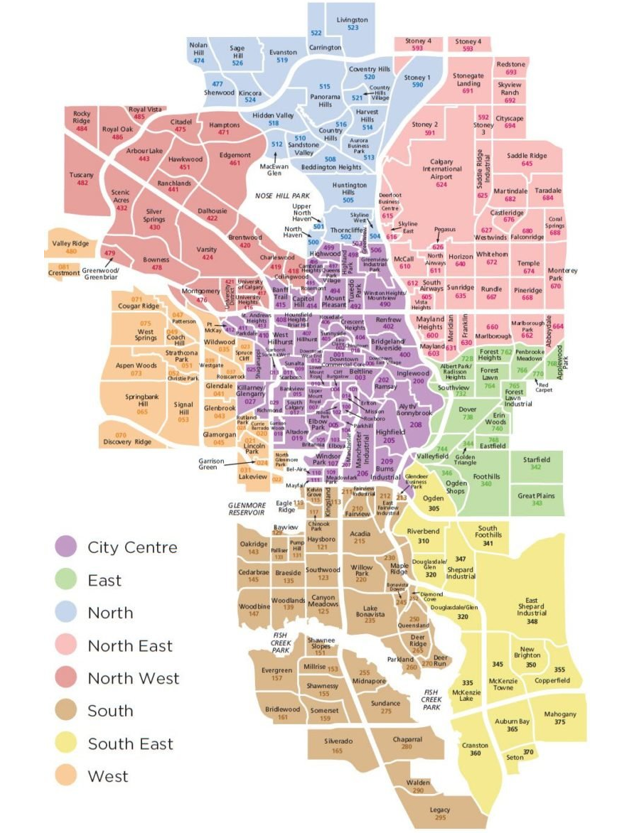 Northwest Calgary is in general the region West of Center Street and North of the Bow River with the exception of several neighbourhoods South of the Bow River on the western edge of the city which are also considered to be part of the Northwest.

Northeast Calgary is the region east of Centre Street and North of Memorial Drive.

Southeast Calgary is the area South of Downtown and Memorial Drive and East of Macleod Trail.

Powered by myRealPage.com
Data is supplied by Pillar 9™ MLS® System. Pillar 9™ is the owner of the copyright in its MLS®System. Data is deemed reliable but is not guaranteed accurate by Pillar 9™.
The trademarks MLS®, Multiple Listing Service® and the associated logos are owned by The Canadian Real Estate Association (CREA) and identify the quality of services provided by real estate professionals who are members of CREA. Used under license.